The largest venomous snake in the world, a large King Cobra’s head is the size of a man’s hand. Typical of snakes called cobras, the King is long and slender, with a long tail and a head not much wider than the neck. The neck vertebrae have long ribs that can be pulled laterally to create the characteristic cobra hood. Fangs are short (8-10 mm) and do not fold back. Kings have 3 small teeth behind each fang, on the maxilla. There are a few on the palato-pterygoid bones and as many as a dozen on the dentary.

King Cobras are found in India (not Ceylon = Sri Lanka), east into southern China and Malaysia, the Sunda Islands to Bali, the Andaman Islands and the Philippines. They occur in dense to open forests (in India, as high as 2000 m = 6000 + feet), usually near water. They are also in bamboo thickets and, occasionally, mangroves. They will also use agricultural areas neighboring their usual habitat.

Depending on habitat, King Cobras are a shiny olive-brown, or gray to gray-brown and, occasionally, reddish or a deep, glossy black. There are often 40-50 narrow, sometimes irregular, light bands across the back (sometimes on the belly). The throat is usually pale yellow. Hatchlings are distinctly banded but may lose the bands altogether. The eyes are usually bronze. There is no eye-glass mark on the hood, as seen in many Naja cobra species.

King Cobras feed diurnally or nocturnally, depending on season, prey and disturbances. Kings are secretive and, actually, are seldom seen. They are much less aggressive than commonly thought, although one might not guess this when confronted by King Cobra’s hooded threat display. Once facing an enemy, Kings do not hesitate to bite, and they  can easily move forward while in the threat posture, something Naja cobras seem to have difficulty doing. As venomous species go, the most toxic snakes usually bite the least often, and the King will move to hide, rather than face a tormenter. Annual deaths by King Cobra bites are less than a quarter of the deaths cause by rattlers in North America.

The King Cobra does not have the most potent of venoms, but it is one of the most dangerous of snakes because of the amount of venom injected. King Cobras have large venom glands and produce huge amounts of venom. They often strike and bite 3, even 4 times in quick succession, each bite delivering 7 milliliters of venom (enough to kill an elephant). The basic elapid venom is neurotoxic, the better to stop ectothermic prey. The venom’s neurotoxins act by binding to a receptor site on the surface of muscles cells, preventing the nerve message from reaching the muscle. The result is rapid paralysis.

Research has shown that cobra nerve receptors are very similar to mammal receptors (as in mice and humans), and the cobra would succumb to its own neurotoxin if it were not for one thing. “Guarding” their receptor sites are sugar molecules. The sugar molecule blocks the binding of the neurotoxin but does not interfere with the smaller transmitter molecule. Further research found that “only 2 groups of animals have sugar in their receptors: [certain] snakes and mongooses.” (Takacs) Counter-evolution in action!

A courting male King Cobra will often stay with one female for a considerable length of time and, although he has nothing to do with the brood after breeding, it is known that a male will often breed with the same female years in succession. King Cobras are the only snakes known to make a nest. The female drags leaf-litter and small sticks into a pile, often 2 feet high and 6 feet across. She will lay 20 – 40 eggs (depending on her size) on the pile and then cover them.

She does not incubate the eggs, in the manner of pythons, but she will coil on the pile and guard them. Incubation is about 110 days, aided by the heat of decomposition in the leaf litter. She will leave just before the eggs are to hatch — not so much a prediction of hatching, but an indication that the smell of eggs – and thus predator attraction — is no longer evident. Hatchlings are about 35 cm (14inches) long and are fully capable of caring for themselves. Maturity is in 5 – 6 years and, once well-grown, longevity is something over 20 years. 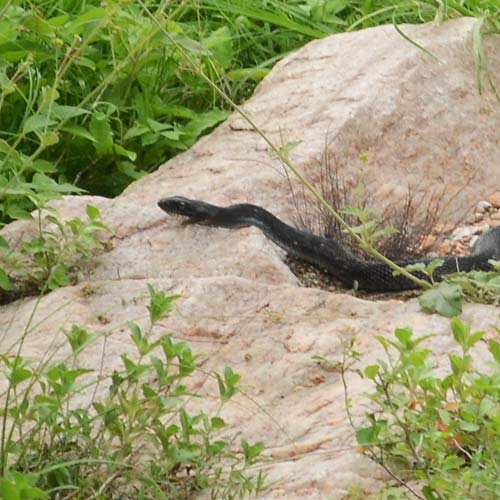 The King Cobra is IUCN listed as Least Concern, but it is threatened by continued habitat destruction and persecution by fearful farmers.

Begun in 2005, and set up by herpetologist Rom Whitaker, the Agombe Rainforest Research Station [Someshwara Wildlife Sanctuary, in Kudremukh National Park] is using the King Cobra as an indicator species for studying one of the last remaining lowland rainforest areas in southern India – a monsoon rainforest with +/- 300 inches of rain a year over 5 months.

In collaboration with the University of Arizona and other universities, and with a pioneering radio telemetry project, King Cobras are rescued and relocated. This is the first documentation study of King Cobra home-range movement, cannibalism, courtship, male rivalry, breeding and nesting success.

King cobras are the only species of snake to build nests for their young, which they guard ferociously.