Cat-sized, the very long tail is the Ring-Tail’s most distinctive feature, carried straight up with a cane-crook at the tip. Lemur hind legs are longer than the front, more pronounced in arboreal species. The muzzle has touch-sensitive vibrissae (whiskers) and the nose is a bare, wet rhinarium. The hind foot has a typical thumb-like great toe. There is a grooming claw (a laterally compressed nail tip) on the index toe. They have a number of scent glands. Unlike other lemurid species, the Ring-Tail has a tapetum lucidum.

The various lemurs developed in isolation from monkeys, and without big predators, on the large island of Madagascar. Lemur means “ghost” in Latin. The name refers to their nocturnal and somewhat ethereal behavior, although the Ring-Tail is not really nocturnal. Family Lemuridae, besides genus Lemur, includes Varecia, Eulemur, Hapalemur and Prolemur. Species that were once in genus Lemur are now considered genus Eulemur (IUCN). The Ring-Tail is now the only species in the genus. Catta is a New Latin version of “cat.”

The Ring-Tail is a soft, light gray with white undersides, the black eye-rings around yellow eyes and the wide black and white tail-bands are very striking.

With a few exceptions, true lemurs are diurnal. The Ring-Tail is almost completely terrestrial. Diurnal lemurs seek sunlight, especially in the morning, and sunbathe. They sit with legs extended, taking on what resembles the Yoga lotus position, and absorb heat. When eating, lemurs bite hard shells and skins off with the incisors, but actually bite the fruit with the molars, tipping the head so that any juice runs into the mouth. They seldom soil their fur. Ring-Tails, the only true lemurs with “stink” glands, use their glandular secretions to mark their territory. The wet rhinarium is associated with a keen sense of smell and lemurs are keenly olfactory. Ring-Tails have a large gland on the inside of each wrist and males have one at each armpit. Male to male confrontations involve stink-fights, although it is unclear how they declare a winner. They sit and draw their tails alternatingly through both armpits, smearing the scent thoroughly through the fur. They then stand face to face and shake their tails in the direction of the adversary. And the winner is……? Lemurs also have, and make use of anal glands.

Vocalizations are often shrill but distance between troops is maintained by howling. There is a lot of mewing and purring when groups huddle together for warmth. They sleep curled in a ball, tucking hands, feet and face into the center. The tail is thrown up over the face and down the back.

True lemurs do not swim well and seldom enter water. The long hind limbs make for excellent leaping. The most terrestrial, the Ring-Tail, can jump vertically up to 3 meters. If they take to the trees, they prefer heavier branches, especially the more horizontal and flattened ones. The toe arrangement and modified toenails, plus toe pads, add to their gripping ability. The leaps are launched with the powerful hind legs, which are then swung forward to receive the impact of the landing.

Even though they are primarily diurnal, the Ring-Tail is the only lemurid that has the specialized night-vision involving the reflective tapetum (mirror) in the eyes’ retina. The eyes “glow” in dim light when the viewer sees the reflected light passing back out of the eye. This and the fact that they are the only ones with stink-glands was a major factor in making the genus monospecific.

Specialized lower incisors and incisiform canines form a tooth-comb for acquiring tree gum during times of difficulty. These teeth are also used in grooming.

Ring-Tails are very social, with their group size ranging to 30, but averaging 15. There tends to be more males than females in each group, and females are the dominant members. Females stay with their group for their life-time, males move around. Interactions within the group may be aggressive, with females and males having their own hierarchy. The male hierarchy breaks down during the breeding season. The male surplus seems to be the stimulating factor during the “rut.” The Ring Tail territories are fairly large, ranging from 15 to 50 some acres, depending on food availability.

The breeding season is only about 2 weeks long, with each female only in estrous about one day. Gestation is about 130 days. Newborn eyes are blue, taking a few months to turn the brilliant yellow. The young are raised by the entire group. The young begin to climb at about 3 weeks and soon begin to feed, returning to the mother for nursing and to sleep. Although sexual maturity is reached by 18 months, it is another year before young males are developed enough and strong enough to take on a mature female. The average wild life-span is about 7 years. 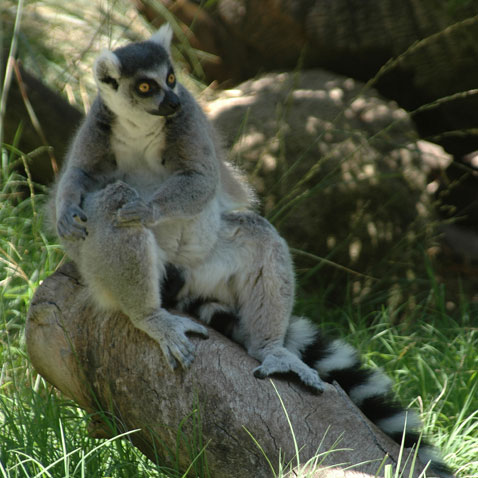 Ring-Tails are CITES listed Appendix I and IUCN listed as Near Threatened. The major threat is habitat destruction by burning for livestock and felling for charcoal production. There was once little direct persecution, because of the native taboo on killing one, but the influx of outsiders has brought the killing of Ring-Tails for bushmeat. Since contact with humans, at least 14 lemur species have become extinct, including a giant the size of an orang-utan.

Ring-Tailed Lemurs use high pitched alerts to their families when there are threats in the area.